Key Events: Earnings and hints of a Central Bank Pivot

30% of the S&P 500 companies reported earnings last week. Here are some highlights:

Only Apple reported strong earnings, and its stock soared 5% for the week. The other companies’ stocks saw losses of between 13.7% (Amazon) and 23.5% (Meta Platforms) for the week, after their poor results led to concerns about the economy.[1] With half of the S&P 500 reporting, indications are that – excluding earnings of the energy sector – profits will decline two quarters in a row.[2]

The Bank of Canada raised rates less than expected on Friday, giving the first signs of a potential Central Bank ‘global pivot’ towards slowing rate increases or even rate cuts, as economies tilt towards recession.

Meanwhile, despite many signs of a slowdown, the first estimate of US 3Q GDP came in at 2.6%, above expectations.

The market decided that this mix of economic and earnings data may allow a “data-driven” Federal Reserve to slow its pace of rate hikes, pivoting to friendlier policies sooner. This caused the ten-year Treasury Yield, which traded as high as 4.28% on Monday, to finish the week at 4.01%, a net drop of more than a quarter of a percent.

Stocks also liked the news: the S&P 500 rose 4% for the week. Smaller stocks led, with small caps up 6%, as the market began to perceive the Fed may be more sensitive to signs of a recession, which would likely hurt smaller stocks more than larger, more stable companies.

As the earnings season progresses, comments about the strength of the consumer and margin pressures may drive continued volatility. We will be watching for pressures from increased commodity prices and interest rates, and for signs of a consumer slowdown.

Additionally, the market is likely to look towards the mid-term elections for signs of direction. As can be seen in the chart below from Real Clear Politics, the odds have increased that Republicans would exert greater control over Congress. While we caution that elections do not usually have as significant an impact on returns as many investors fear, a divided government may lead to greater policy stability, a generally positive outcome for the markets. 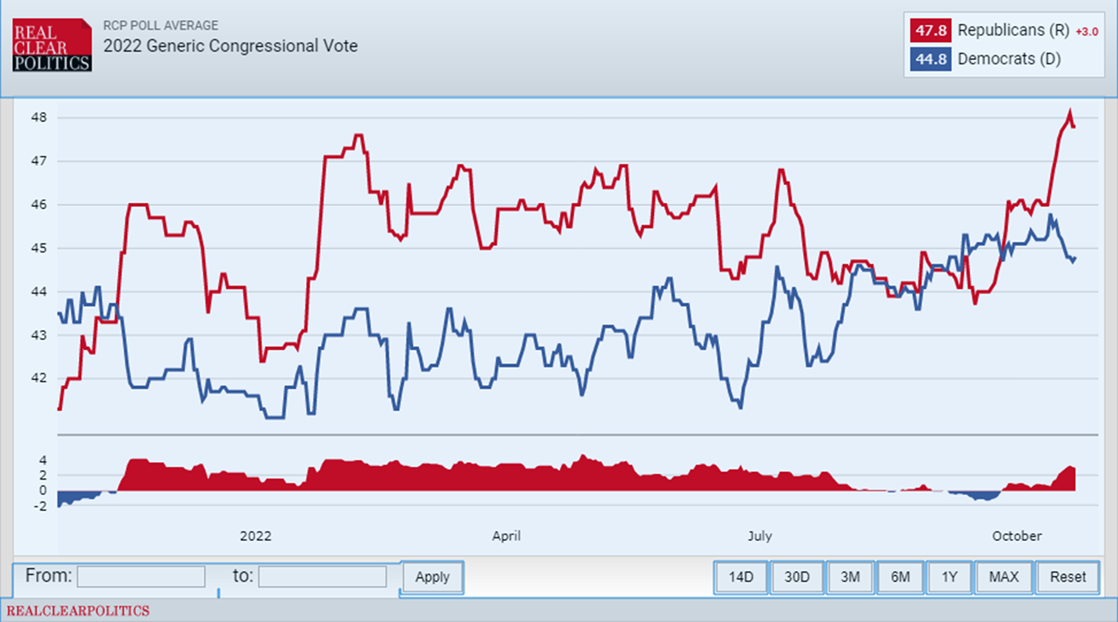